An action can be authorized by one or more actors previously created on the blockchain. Actions can be created explicitly within a smart contract, or generated implicitly by application code. For any given actor:action pair there is at most one explicit associated minimum permission. If there are no explicit minimum permissions set, the implicit default is [email protected] Each actor can independently set their personal minimum permission for a given action. Also, a complex but flexible authorization structure is in place to allow actors to push actions on behalf of other accounts. Thus, further checks are enforced to authorize an actor to send an action.

There are two types of actions involved in a transaction. They mainly differ in the way they are executed:

Implicit (inline) actions are also defined in smart contract code, just like explicit actions. The key difference is that inline actions are not included in the actual transactions propagated through the network and eventually included in a block; they are implicit.

In FIO, smart contracts consist of a set of actions, usually grouped by functionality, and a set of type definitions which those actions depend on. Therefore, actions specify and define the actual behaviors of the contract. Several actions are implemented in FIO system contracts for account creation, producer voting, token operations, etc.

The action instances may consist of regular actions or context free actions. Signatures are created and validated at the transaction level. Accounts and permissions are handled on a per action basis. Each action instance contains information to validate whether it is authorized to be executed based on the permission levels of the actors specified in the action and the actual authorizations defined in the smart contract for that action.

A signed transaction extends the basic contents of the transaction schema to include the signature(s) generated by the account(s) that signed the transaction. It also includes any data associated with the context free actions, if any, that were included in the transaction instance. A transaction is not ready for execution and validation unless it is signed by the applicable actors.

The transaction must be signed by a set of keys sufficient to satisfy the accumulated set of explicit actor:permission pairs specified in all the actions enclosed within the transaction. This linkage is done through the authority table for the given permission. The actual signing key is obtained by querying the wallet associated with the signing account on the client where the application is run.

After the transaction digest is computed, the digest is finally signed with the private key associated with the signing account’s public key. The public-private key pair is usually stored within the local machine that connects to the local node. The signing process is performed within the wallet manager associated with the signing account, which is typically the same user that deploys the application. The wallet manager provides a virtual secure enclave to perform the digital signing, so a message signature is generated without the private key ever leaving the wallet. After the signature is generated, it is finally added to the signed transaction instance.

The process to verify a transaction is twofold. First, the public keys associated with the accounts that signed the transaction are recovered from the set of signatures provided in the transaction. Such a recovery is cryptographically possible for ECDSA, the elliptic curve digital signature algorithm used in FIO. Second, the public key of each actor specified in the list of action authorizations (actor:permission) from each action included in the transaction is checked against the set of recovered keys to see if it is satisfied. Third, each satisfied actor:permission is checked against the associated minimum permission required for that actor:contract::action pair to see if it meets or exceeds that minimum. This last check is performed at the action level before any action is executed.

Since the sequence of actions contained in the transaction must be executed atomically as a whole, the FIO software first checks that the actors specified in each action have the minimum permission required to execute it. To that end, the software checks the following for each action:

If there is at least one actor whose set of named permissions fail to meet the minimum permission level required by the corresponding actor:contract::action pair in the smart contract, the transaction fails. The reason why action permissions are checked before any action is executed is due to performance. It is more efficient to cancel a transaction with all actions unexecuted, than doing so after a few actions executed, but later were rolled back as a result of a failed action or authorization. Any state changes incurred during a failed action must be undone to preserve data integrity. Database sessions are expensive in terms of memory usage and computing resources. Therefore, undo operations must be minimized as possible. 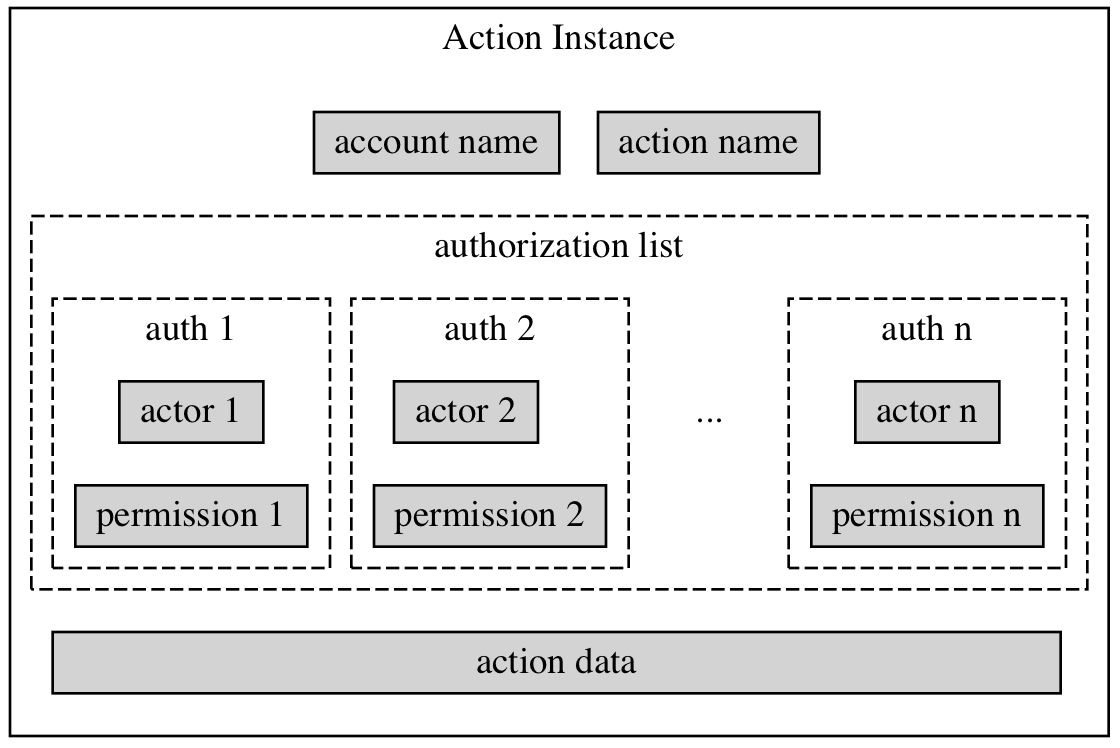 After the minimum permission levels are checked, the authority table for the receiver account’s permission that matches each actor’s permission within the action instance is checked.

To prepare for action execution, an apply context instance is created locally for each action. The apply context, as its name implies, contains references to the necessary resources to apply the action, such as an instance to the chain controller, the chain database where state is kept, the transaction context where the transaction is running, the actual action instance, and the receiver account to whom the action is intended.

The status field is an 8-bit enumeration type that can hold one of the following results:

A transaction is verified and validated at various stages during its lifecycle: first when it propagates on the peer-to-peer network as a loose transaction, then during block validation as the block is confirmed among a supermajority of block producers, and optionally during a blockchain replay if nodeos is configured to fully re-validate transactions during replays. By default, recorded transactions are not completely re-validated during replays since it is assumed that the node operator has established trust in the local block log, either personally or through a side-channel so it is no longer considered a potential source of byzantine information.

When validating a transaction as part of a block, multiple validations occur at various levels. In full block validation, all transactions recorded in the block are replayed and the locally calculated merkle tree root hashes (generated from the transaction receipt data and the action receipt data, respectively) are compared against the transaction_mroot and action_mroot fields in the block header. Therefore, if a recorded transaction is tampered within a block, not only the merkle tree root hashes would cause a mismatch, but also the transaction signature(s) would fail to validate. If the tampering was not performed by a bona-fide block producer, the block signature would fail to validate as well.